Today is ANZAC day in Australia, so I have been thinking about war and the incredible sacrifice soldiers make for their country. Over the years wars have elicited a huge loss of young lives, incredible hardship for the soldiers themselves and the families they left behind. Today particularly we thank them.

So thinking about war, I am writing a post on a recent trip to a World War 1 Fort in the remote mountainous region of Northern Italy.

Earlier this year in mid January, during our Cortina d'Ampezzo conference in the Dolomite region of northern Italy, we took our group on a trip to the Tre Sassi Fort at Valparola Pass. Built by the Austrian Hungarian empire in 1897 to protect their southern borders and updated in 1910, this fort was utilised by the Austrians during what the Italians refer to as 'Grande Guerra', which translates to the Great War, or as we know it, World War 1. In 1915, this mountainous area of Italy was the site of a nine month battle between the Austrian and Italian troops to gain control of this border region. Perched on rocky outcrops and hidden in dark caves, the soldiers fought a bitter battle, making very slow progress gaining a few metres one night, then often relinquishing it the following night. The conditions were very harsh, with the winter of this period recorded as one of the coldest on record with huge snow falls and exceptionally low temperatures.

Several years ago, with the help of EU funds, the historical ruins of the area's WW1 buildings and tunnels were restored and if you are interested in this fascinating period of history, then this area it is certainly worth visiting. It is actually an open air museum, comprising a 5km radius of tunnels, trenches and machine gun posts, plus the original fort now a museum. We hired a guide to explain the history of the area plus the collection of war memorabilia housed in the museum - as an added bonus, he dressed in an old Austrian officers uniform which had belonged to his great uncle. This open air museum is particularly popular with hikers in the Summer months as it allows for wonderful exploration in an area of superb views.

With temperatures of -8ºC and heavily falling snow on the day we were there, we were able to have a small understanding of just how inhospitable this place would have been for the hundreds of soldiers based in this area during the World War 1 conflict. 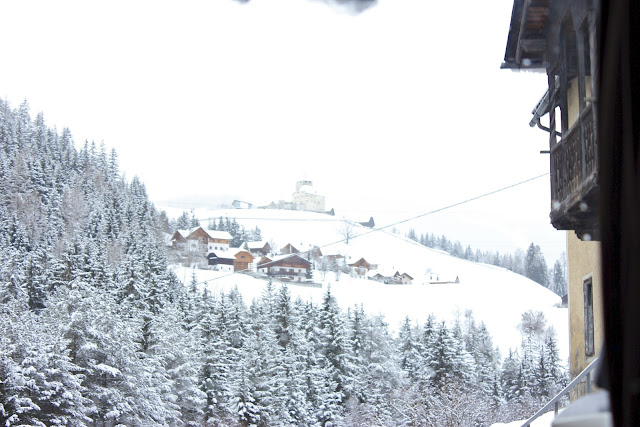 Posted by Eclectic Discoveries at 11:47 AM