We are in Val Thorens in Savoie in Les 3 vales area in France, running a conference. The lectures have been interesting and informative and the skiing is sensational - spring skiing at its best - warm sunny days (T-Shirt skiing for some), crystal blue skies and several nights a dusting of 5cm of snow. Delightful really!! At 2300 metres, this resort is the highest ski resort in Europe, so one can expect snow here for much later in the season - in fact the resort does not close until early May, particularly this year when the season has had exceptional snow. We got a bus up the mountain from Moutiers (1.15hr transfer), which is an easy arrival/departure point by train (except for no lifts for your luggage on the platforms - I don't understand that about Europe - surely a large amount of passengers have luggage, so why do so few train stations have lifts??). Our hotel has a spectacular view of the whole front valley which is extensive and has a vast number of ski lifts which give access to the multitude of exceptionally long ski runs over the mountains to the valleys beyond. With so many ski runs, the wait at lifts is never long even though it is busy with Easter travellers.

There is also a very well organised walking group here called Raquette Nature, who, for  small fee, take half and full day snow shoe walks in a variety of different locations across the mountains. I did 2 of the half day (3.5hrs) snow shoe walks and thoroughly enjoyed them. One was focused on walking to areas where we saw local wildlife - a fox resting outside his hole, a hare, and a family of local marmot who are now just active as the weather warms. My 2nd walk took us up the cable car to 3000mtrs, then we ascended a further hundred meters to the foot of the Glacier de Peclet, then descended to the resort across virgin snow, often sinking to my knees in the untrodden snow - hard work but spectacular mountain vistas that seemingly went on for miles. I enjoy walking in the snow shoe attachments as they give incredible grip and allow one to walk on angles that would be impossible without them.

The other thing this resort offers which I thought amazing, but admit I did not try, is a 6km dedicated toboggan track! It leaves from the top of the 3000mtr cable car, and as I hiked down the mountain I watched  as people flew past with a small metal arm as the only means of a hand brake. One can even do it at night which must be rather frightening, to say the least. It looked like a huge amount of terrifying fun, an open air, natural theme park ride - one does has to leave something to do on the next visit! 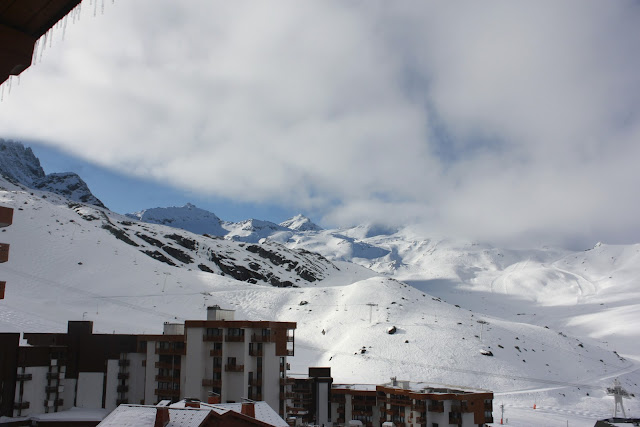 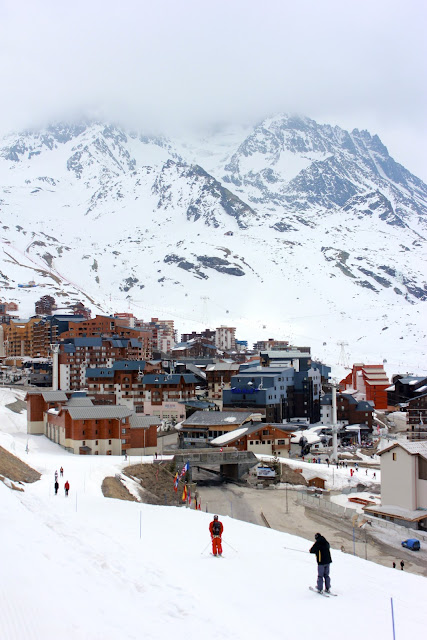 Posted by Eclectic Discoveries at 1:12 AM