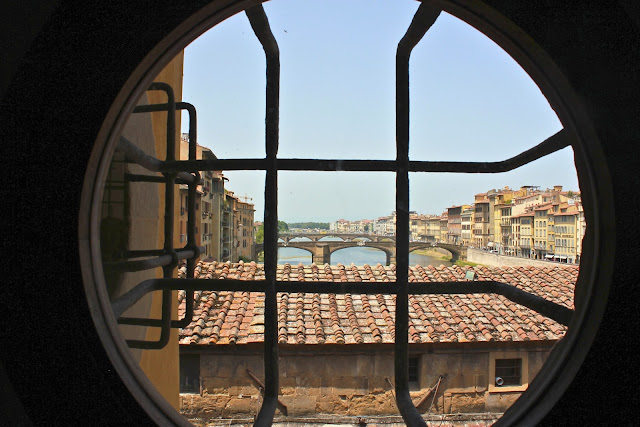 I was absolutely thrilled to be able to view the Vasari corridor in Florence last week - a bespoke tour that until recently, has been difficult to organise. Small guided groups that must always include a guard are shown through this enclosed passageway that offers a very interesting insight into the life of the powerful Florentine Medici family in the mid 1500's. It feels rather secretive as one passes through an innocuous door from a main passageway in the Uffizi Palace, leaving behind the tourists, the noise and the heat, into a quite calm corridor-like space, lined with artworks that span the centuries. 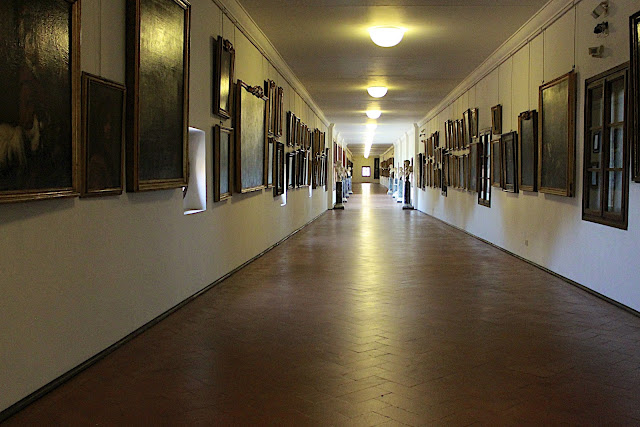 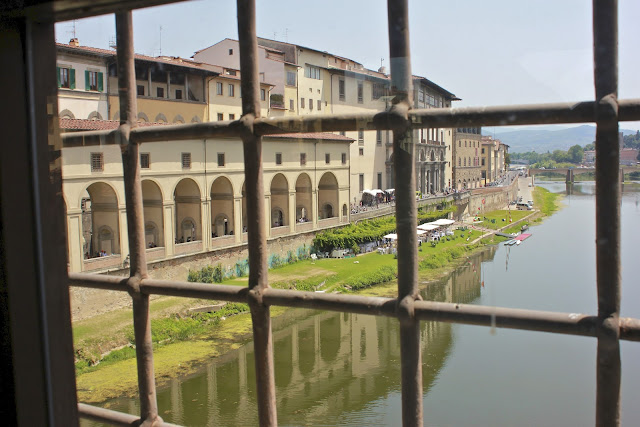 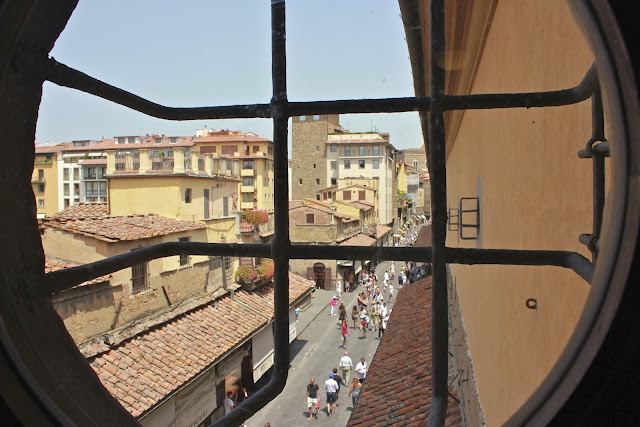 This corridor, commissioned by Grand Duke Cosimo de Medici in 1564, was designed by Giorgio Vasari and built in an amazingly speedy 5 months. Planned to celebrate the marriage of Cosimo's son, Francesco to Johanna of Austria it allowed the family to move freely between their offices in the Palazzo degli Uffizi and their residence in Palazzo Pitti on the opposite side of the Arno river. At 4.5mtrs wide and 10mtrs high, it is much larger than I expected, for this size was required so the Medici's could be carried by their servants on a litter at shoulder height. From the external it is almost disguised, blending seamlessly into the existing Ponte Vecchio, although the meat market which had previously occupied the bridge had to be removed to avoid the smells reaching into the passageway. It was replaced with the much more acceptable goldsmith shops which still remain to this day.

The passageway offered the Medici family a safe and secure route across town in an era when they felt insecure in public spaces. 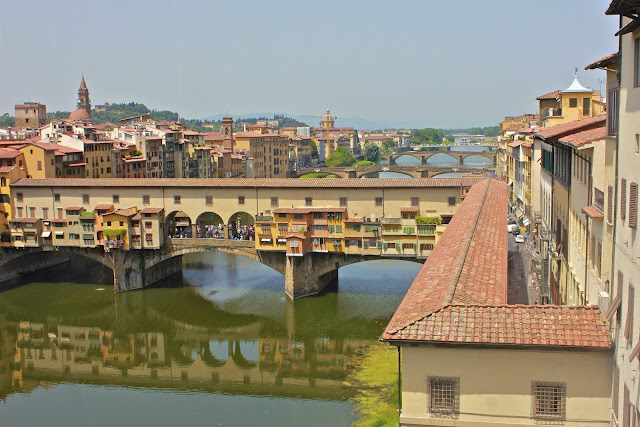 In 1939 Benito Mussolini ordered the original windows facing the Arno be replaced with larger windows to offer a better panorama for a visit by Adolf Hitler, who was apparently suitably impressed. The Ponte Vecchio was the only bridge in Florence not totally destroyed by the Germans in WW2 and legend has it that Hitler ordered it be saved from destruction due to his fondness from his official visit.

The corridor snakes through buildings like a modern 'skyway', and at one point even passing into the little chapel of Santa Felicita, on the Pitti Palace side of the bridge. Protected from the eyes of the citizens of Florence by a thick timber railing, the Grand Duke's family were able to partake in church services in privacy by way of this corridor. 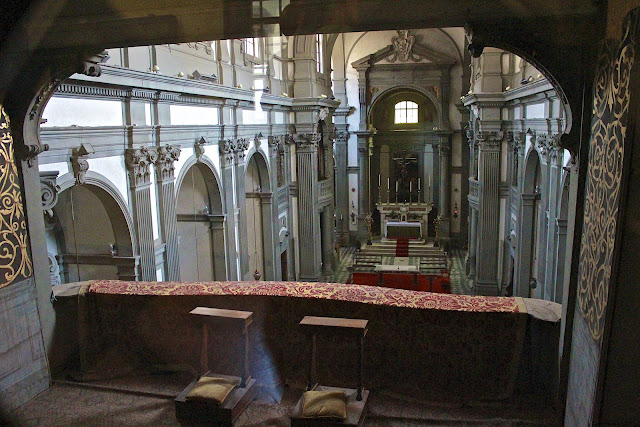 The artworks lining the walls are a collection begun by Leopold de Medici (1617 - 1675) and the entire collection is self portraiture by well known artists. Although not in the league of the main Uffizi art collection, (that is a tough one to beat!), I thought is was a fascinating niche collection by a very specialised group of people.

Walking in the steps of such an amazing dynasty whose impact upon Florence shaped the city into what we know today, was truly a wonderful experience and certainly worth going out of your way to organise a visit. 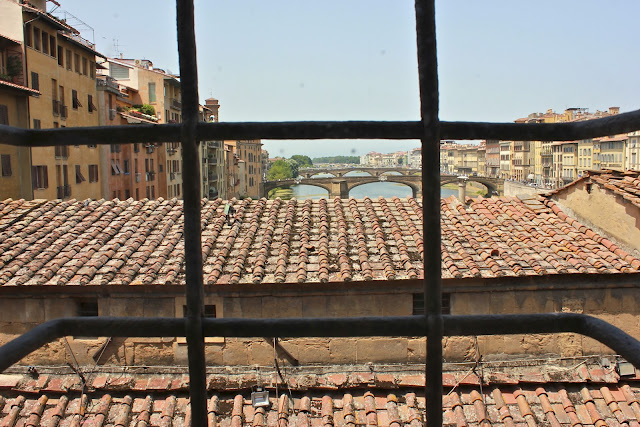 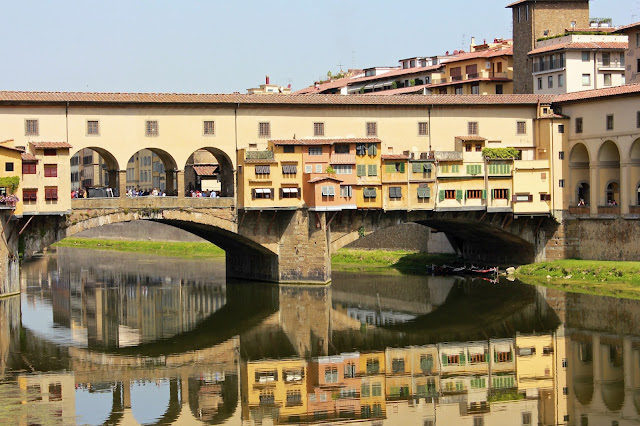 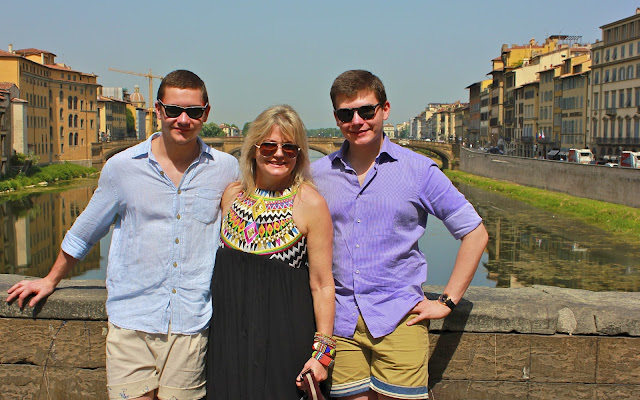 Posted by Eclectic Discoveries at 7:01 AM