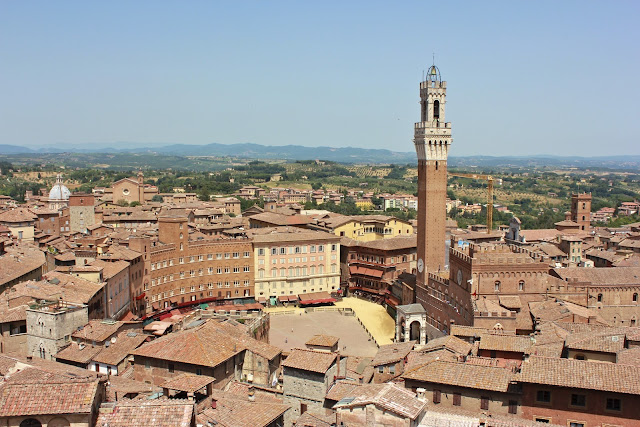 On Thursday, I arrived back in Italy to a summer sun in full force, and what a delight it is to be here! My sons are with me on this visit so on Friday we drove the short distance to Siena so I could show the boys this beautiful Tuscan town. I thought, after viewing the spectacular Duomo and Piazza del Campo, we would go to a favourite trattoria, "La Taverna di San Giuseppe", but little did we realise the (almost) week long celebrations of the famous Sienese Palio had begun! Perhaps if we had known this, we may have avoided the city as I am not one for hordes of tourists, but we had a fabulous day watching the centuries old tradition that is this Sienese event, so in the end, being unaware of its happening was an advantage.

This twice yearly horse race, run in Piazza del Campo, the beautiful piazza in central Siena, began in 1656, though in the early days it was performed on bulls and even donkeys. 10 contradas (local municipal divisions) are chosen from the 17 contradas that represent Siena. The very emotive tradition of contradas goes back 800 years, and each is depicted by a symbol and coloured flag flying from every home and municipal building around town. The Palio is a tradition of skill and cunning as each rider is given a horse chosen by a lottery, which occurs a few days before the actual horse race - and as the saying goes, "The fastest horse doesn't necessarily win the race" - a fact of life really.

Our visit on this day coincided with the lottery of the horses for each contrada, but in traditional Italian style this was done with enough pomp and ceremony to rival a royal wedding! People, perched on seemingly every vantage point in the piazza, were there to view the ceremony and with full sun and Italian heat, the spectacle was certainly worth viewing. We chose a table at a restaurant around the perimeter of the piazza, so had front row seats as the event unfolded and it was one of those memorable events of life! 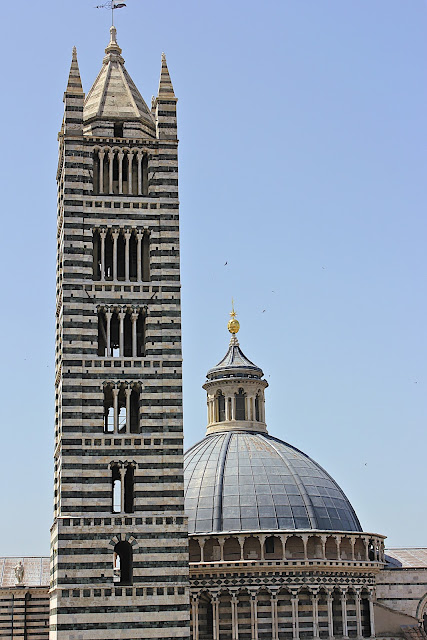 Posted by Eclectic Discoveries at 5:20 AM