"Via Ferrata" - Hiking in the Dolomite Ranges

For more than 15 consecutive years, we have operated a conference in the 2nd week of each January in the beautiful Italian town of Cortina D'Ampezzo. It is visually magnificent with the imposing Dolomite alps that surround the town covered in heavy quantities of snow and the town of Cortina filled with the passegiata (an Italian term for the parading of people) of sumptuous furs. Skiing reigns supreme!!

However, just last week for the first time we chose to run a conference in this familiar area in the late Summer/early Autumn period, and it was every bit as beautiful and exhilarating (maybe even more so!). The Dolomite ranges offer a variety of Summer sporting activities, including many cycling paths plus a multitude of hiking trails from beginner to the more advanced "Via Ferrata". The "Via Ferrata", (which literally means iron way) is a series of walks in the Dolomite region which uses iron "protection" in the form of ladders, rope rails and steps to join otherwise inaccessible areas.

The history of these iron "protection" formats goes back to WW1 where this border area saw significant fighting between Austro-Hungarian and Italian soldiers to control the highest peaks for artillery and line of sight advantages. The sheer scale of the ranges, the verticality of the Dolomite mountains and the extreme weather, meant enormous troop deaths on both sides. So to try to gain safer and quicker movement through the area, the Italian troops began to  fix permanent iron grips into the rock face and thus the first "Via Ferrata" was born.

Today these hikes are an updated version of this original idea and they offer awe inspiring views across these incredible ranges. We organised several hikes of which one used a "Via Ferrata" section, climbing 2275mtrs to Riffugio Nuvolau. As Australians, this is higher than the highest point in our country, (Mt Kusciuszko 2228mtrs) so the trickiest part for us was dealing with the "thinner" air, however we took it slowly, with multiple rest breaks, and all of the group completed the hike. Not knowing the hiking trails on these mountains, plus not being very experienced hikers, we definitely felt more comfortable with having 2 guides accompany us as their knowledge and expertise is enormous.

The slopes are steep - in fact I would say very steep, and the views across the valleys to Marmolada glacier and beyond are exhilarating - though like any of these things, the difficulty is relative - our guides obviously called this an "easy" via ferrata hike - but then again they were born in this area and ski/hike/climb/walk/run/cycle these mountains every day!!

At the conclusion of our first ever "Via Ferrata" hike we had a fabulous meal waiting for us at Rifuggio Avereau - heartily consumed with good quantities of local wine! I fully intend to return at this time of year to accomplish more of these awesome hikes - in fact I am planning to organise a dedicated hiking tour to this magnificent part of the world. 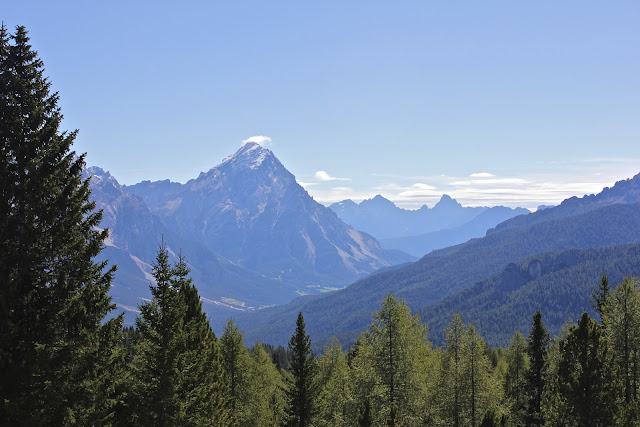 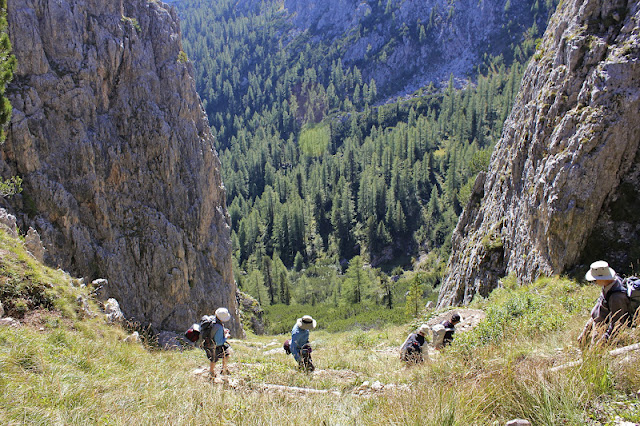 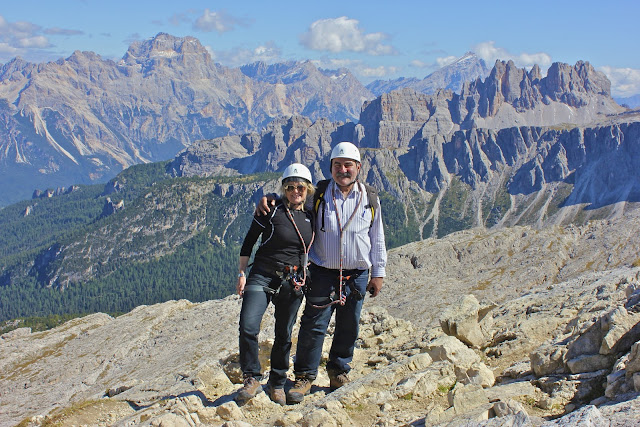 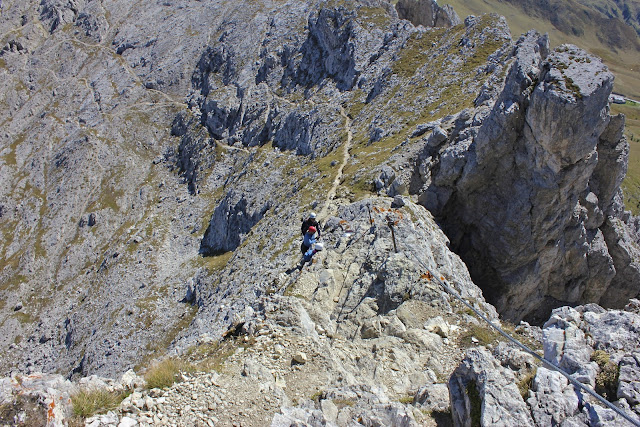 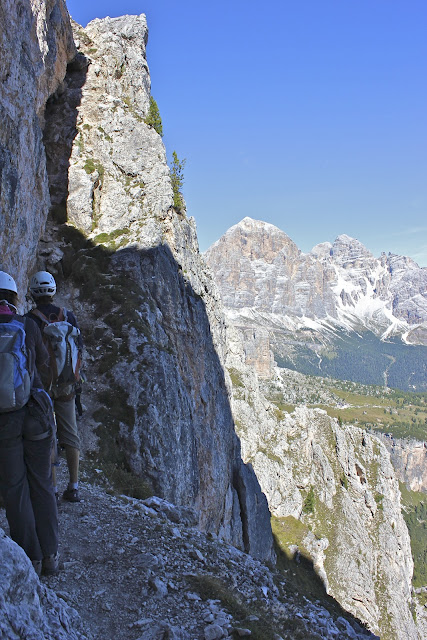 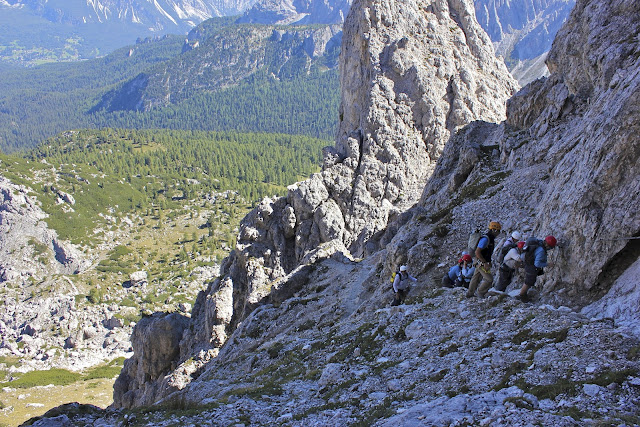 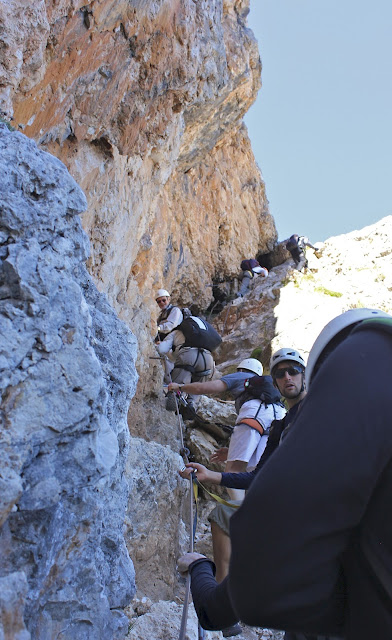 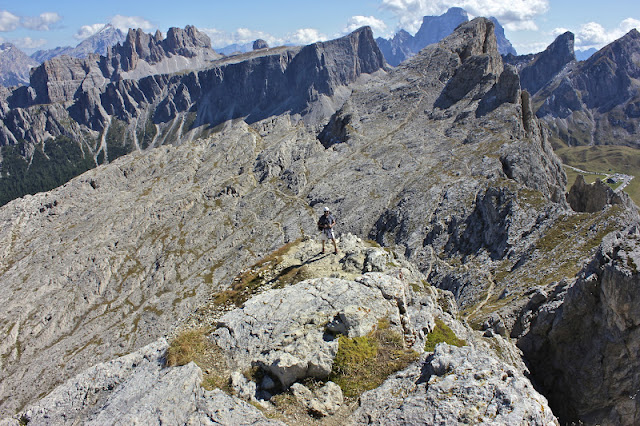 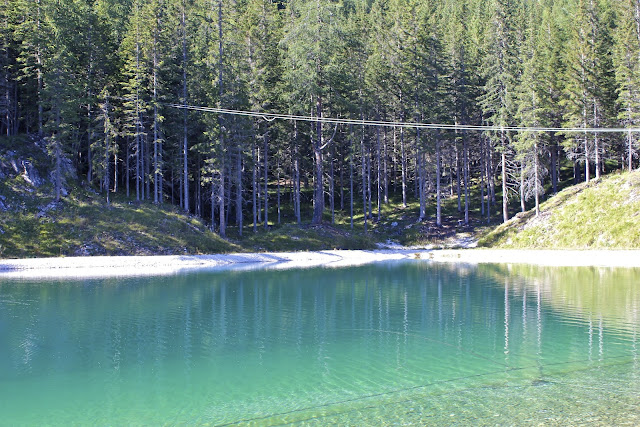 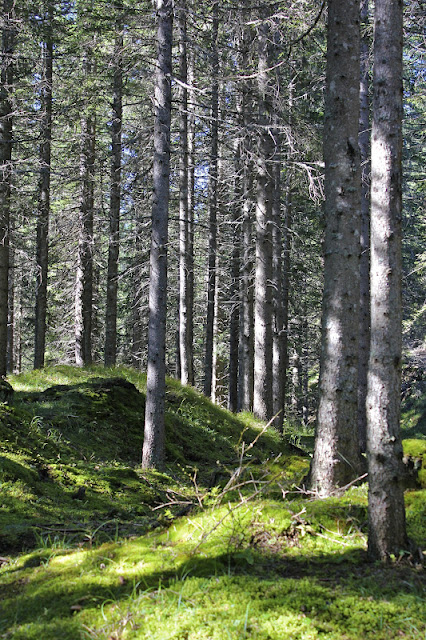 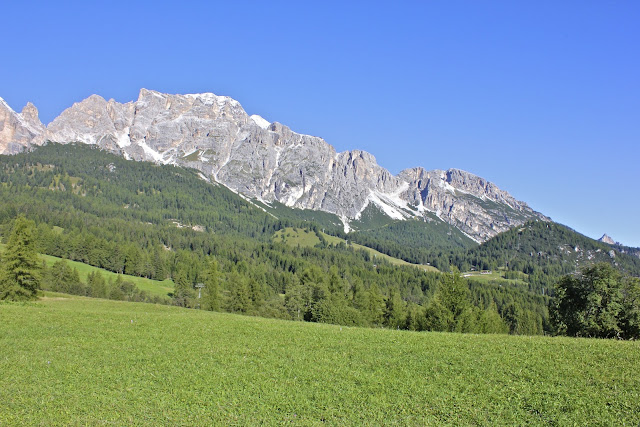 Posted by Eclectic Discoveries at 10:03 PM