Sitting in the midst of Venice’s lush green Giardini grounds, Australia’s new 'black box' pavilion is the perfect container for Australia’s biennially chosen artists to shine. The small canal it sits alongside is the only indication that one is in this water bound city, because summer’s maddening crowds are replaced with an open, cool, green space that absolutely surprises & delights.

When the opportunity to take the final permanent space in the Giardini was offered to Australia, it was one too good to refuse, and with the generosity of mainly private donations, Denton Corker Marshall won the competition to design the building.

The black granite clad cube, a mysterious & contemporary container, opens like a gift box presented on your birthday, eliciting the same delight and excitement. To my mind, good Architecture must always stir the emotions, and be a visual representation of people, place & purpose, so Australians can be very proud of what this well executed building says about us – quiet sophistication abounds. Ultimately though this pavilion is about what lies within, so it is right that this pavilion possess an ability to sit quietly and regally in its own skin, presenting the gift inside.

And indeed the gift this box delivers is definitely one worth devouring. Fiona Hall’s enormous body of work, seemingly, randomly combines disparate elements that become incredibly intricate and thought provoking sculptures. Entitled “Wrong Way Time’ it is presented as a series of vignettes that relate, yet also sit independently, challenging the notions of three interconnecting concerns: global politics, world finances and the environment. Ordinary materials, found objects and images are given new life and in the process elicit powerful meanings as she questions the impact on culture & tradition in our pursuit of money & power.

In this dark, still space each element takes on heightened significance, the silence punctuated only by the occasional call of a lonely bush crow, contrasted with the man-made call of the cuckoo clock – environment versus occupation.

Of all the intricate vignettes, 2 really stood out for me – the beautiful woven forms of endangered Australian desert animals made in collaboration with women from the Tjanpi Desert Weavers are, at a glance, beautiful sculptures, but on closer inspection reveal a more sinister meaning. Woven with a mix of desert grasses and torn shreds of British & American military camouflage gear, supplied by Hall, they speak volumes of the impact of European occupation on this region of our country. The region also endured the ‘hidden’ post WW2 British nuclear testing, known as the Maralinga tests – the impact never really acknowledged by the British but clearly still felt by the Aboriginal communities to this day.

My other particular favourite, situated in the heart of the installation, were the suspended sculptures depicting traditional people in stripped out military clothing. Hanging in an almost ‘totem pole at the gallows’ format, these figures are traditional and very raw. The heads are intricately woven from military clothing modeled over life like forms, with bones and teeth set into them, depicting a frightening, yet also defiant and very proud demeanor. The military ‘clothes’ they wear, some with decorative military epilates still intact, have been stripped of all except the seams, reinforcing the theme of the effects occupation on traditional people, land and environment.

One can also not pass the beautifully made bird nests – made with shredded American dollar notes, nor the series of painted cuckoo clocks detailed with sinister images and profound words. ‘Wrong way time’ seems indeed a very apt title for the intersection of her concerns and the materials chosen to depict them.

My only disappointment was, that my targeted visit did not allow me to visit over several days, because I have no doubt that like all good art works, multiple visits would reveal even greater depth. 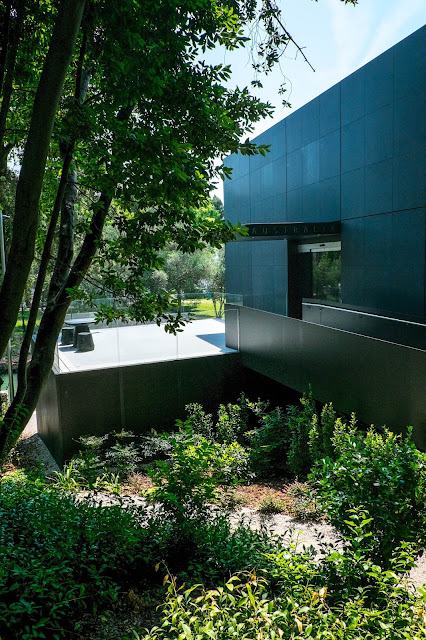 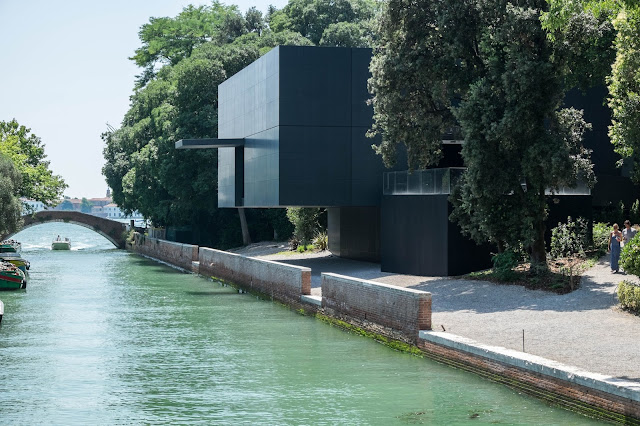 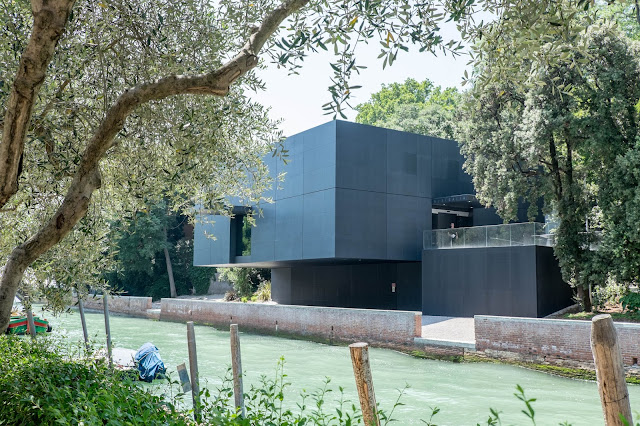 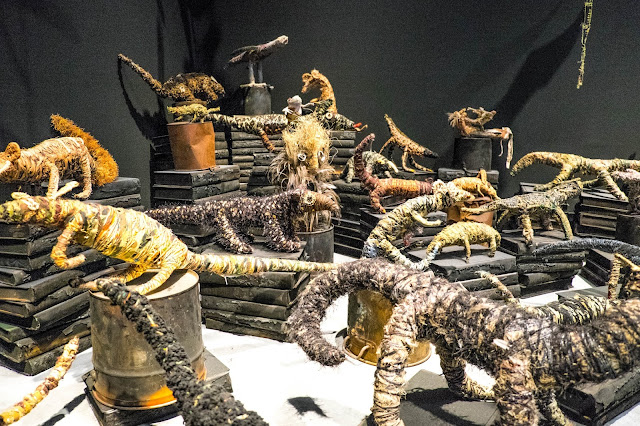 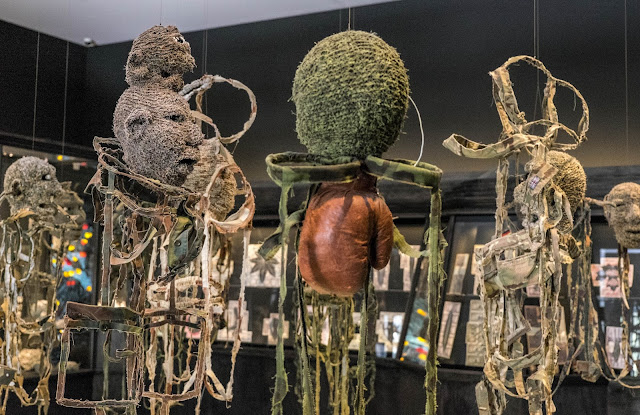 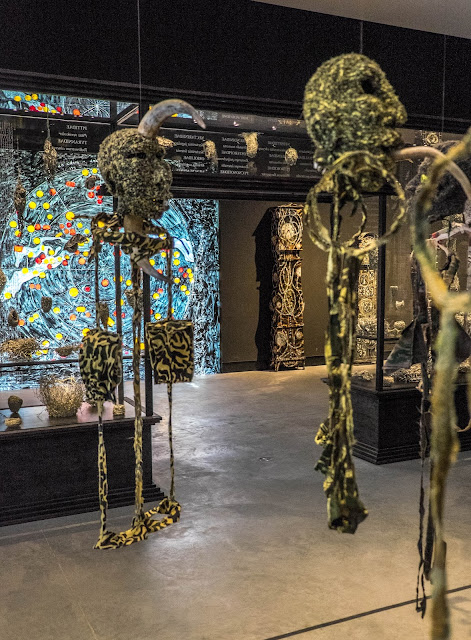 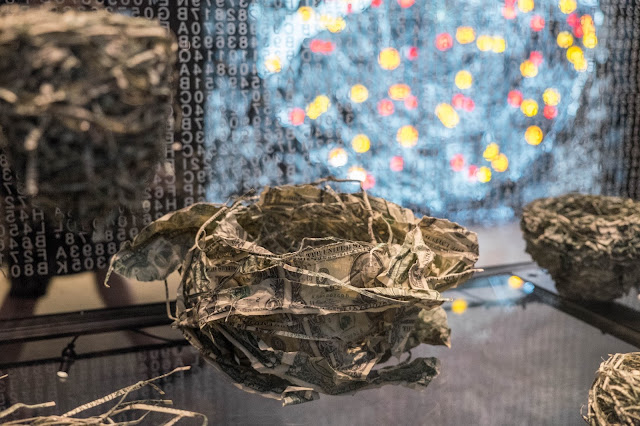 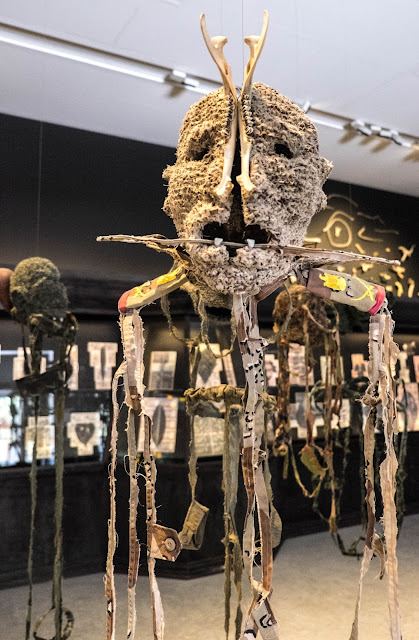 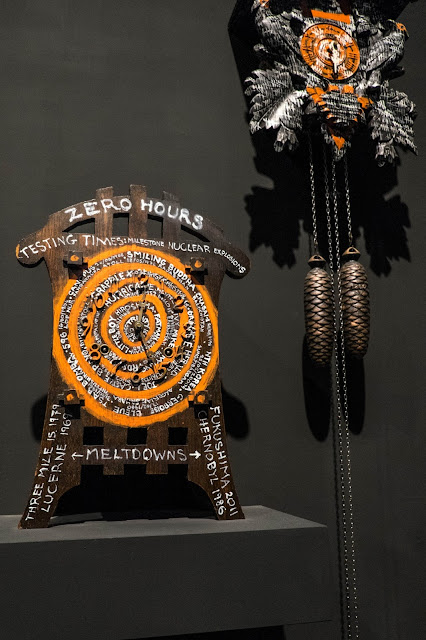 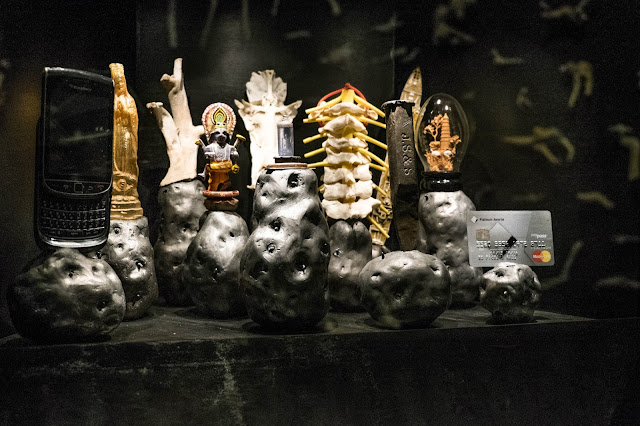 Posted by Eclectic Discoveries at 9:41 PM