In 1875, the Paris L'Opera Garnier, designed by architect Charles Garnier in Baroque Revival style, was inaugurated. In July 2011, almost 150 years later, its first restaurant, designed by French architect Odile Decq opened, and it was well worth the wait.

Having booked several months ago from Australia, yesterday we went for lunch. The food was not my only interest - I was particularly curious to see the architecture as the entire 2 level space has been designed to have no impact upon the original building. Curved glass walls, that emulate the folds in a voluminous stage curtain, surround the perimeter and support the upper level. They define the space within its openness, surrounding and at the same time separating. In fact the 6 Million Euro space is a study in contrasts - intimate yet grand, simple yet complex and the overall result is a voluptuous magnificence.

And yes, with head chef Christophe Aribert (from 2 MIchelin star restaurant 'Les Terrasses') the food is equally as enticing. The menu is largely a modern twist on traditional French and we chose the reasonably priced fixed price menu. At 32Euro p/p for lunch it allowed several choices across 2 courses (wine was extra) and so not to miss out on either entree or desert we shared each of these in addition to our main - wonderfully intense flavours and beautiful presentation across all plates.

Overall my lasting memory will be the intimacy created by the luxurious red and white colour palette, the womanly shape of the dining chairs and the upper curved walls which allow for private dining zones - all designed to entice you to linger over the enjoyment of sharing food, wine and conversation with those you love spending time with. A sublime dining experience. 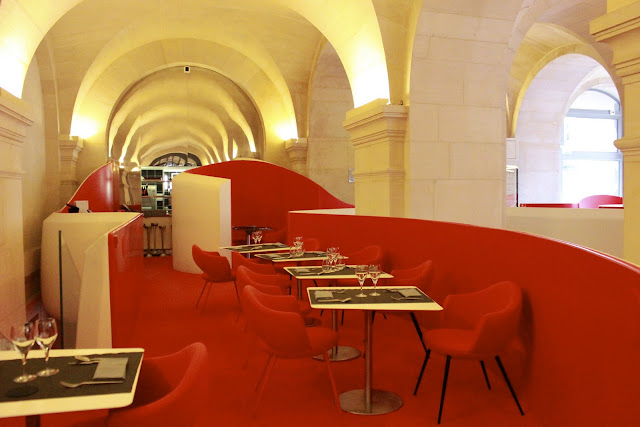 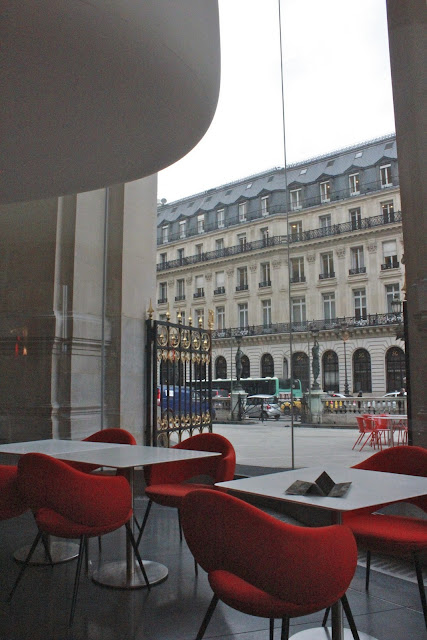 Posted by Eclectic Discoveries at 7:18 PM